How Will the New Tax Plan Affect You?

This article was originally posted on The Daily Signal

With lawmakers poised to pass the Tax Cuts and Jobs Act—a sweeping tax reform package—many individuals and families will see very different tax bills come 2018 and beyond. In general, an overwhelming majority of Americans will pay less in federal taxes.

So how will you fare under the GOP tax plan?

Well, on net, most Americans will see a significant tax cut, including virtually all lower- and middle-income workers and a majority of upper-income earners.

The Tax Cuts and Jobs Act will, on average, provide immediate tax cuts across all income groups, according to analysis from Congress’s Joint Committee on Taxation.

This analysis does not, however, show how those tax cuts would vary based on factors such as total income, type of income, number of children, and itemized deductions.

Among the new legislation’s most beneficial components is a significant reduction in business tax rates. This will help make America more competitive with the rest of the world, and will result in more and better jobs as well as higher incomes for American workers. The bill will also put more money back into the paychecks and pockets of most Americans.

The new bill does lack some important pro-growth and simplification components, however. It does not go far enough in eliminating deductions and loopholes or in reducing the top marginal tax rate.

It adds a discrepancy between the top rate for individual versus pass-through and small businesses and adds some complicated business provisions. It also fails to eliminate the alternative minimum tax and it phases out and eliminates some tax cuts for budgetary reasons.

To get a better idea of how some workers, families, and small businesses will fare under the new tax code, The Heritage Foundation has estimated the tax bills of a range of taxpayers under current tax law and under the GOP’s final version of the Tax Cuts and Jobs Act. 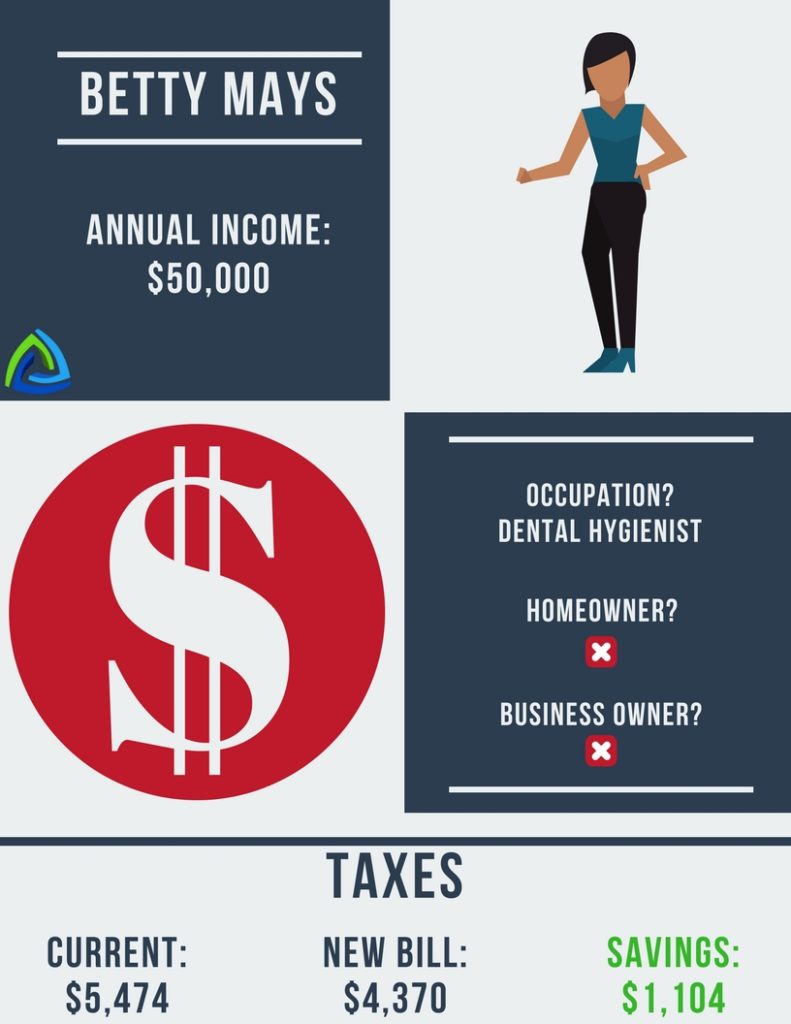 These tax cuts come primarily from a higher standard deduction of $12,000 and from lower marginal tax rates. Currently, Betty’s marginal tax rate is 25 percent. But under the new bill, her tax rate will be 12 percent. 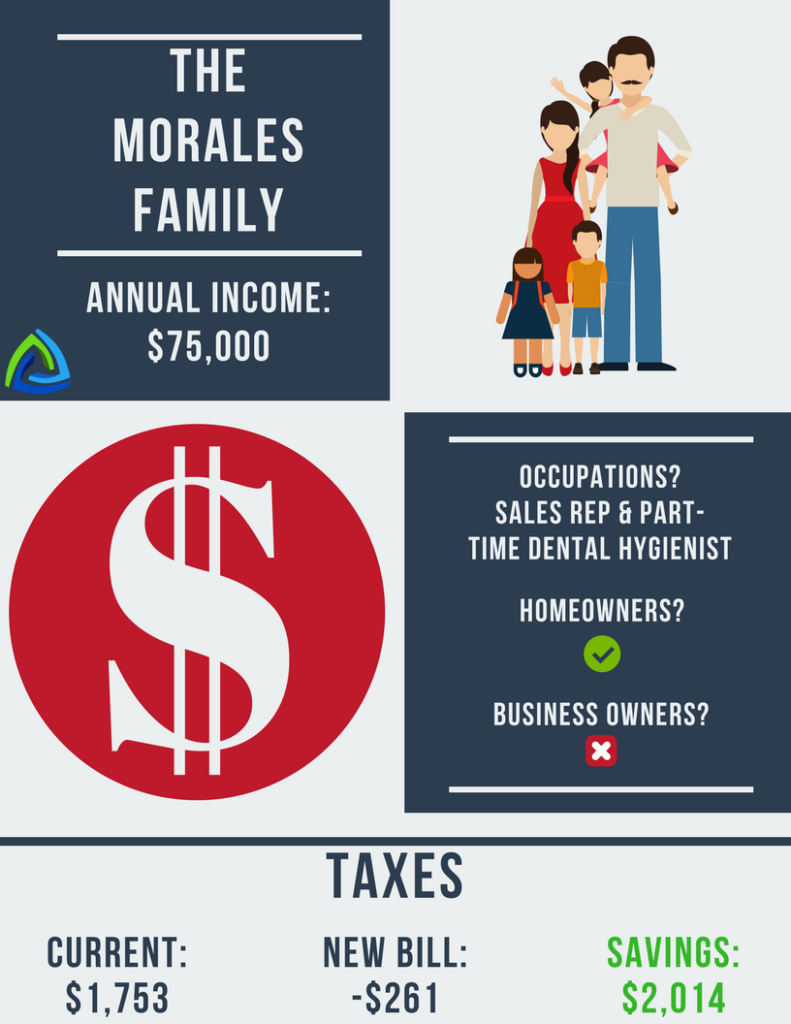 David is a sales representative and earns an average of $55,000 a year. Maria is a dental hygienist. After having children, Maria cut back to part-time work, and she earns $20,000 a year. Under the current tax code, David and Maria pay $1,753 each year in federal income taxes.

Even though David and Maria would have more taxable income under the proposed plans (as a result of not being able to claim personal exemptions), they would still receive a tax cut because they would face lower marginal tax rates and receive larger child tax credits.

Their current marginal tax rate will decline from 15 percent to 12 percent, while their $3,000 in total child tax credits will double to $6,000.

The numbers listed in the above example for David and Maria’s current tax payments assume David and Maria own a home and live in a state with average tax levels. Under the current tax code, if they did not own a home but instead rented, their federal tax bill would be higher ($2,375 instead of their current $1,753 tax bill).

This would mean that their subsequent tax cuts—as renters—would be larger—$2,636, or 111 percent. The Tax Cuts and Jobs Act partially limits—by placing a $10,000 cap on state and local tax deductions—an inequity in the current tax code that provides bigger tax breaks to property owners, wealthy individuals, and people who live in high-tax states.

Under the new tax legislation, however, David and Maria’s tax bill will be the same regardless of whether they own a home or rent because the larger standard deduction will mean they will not itemize in either case. 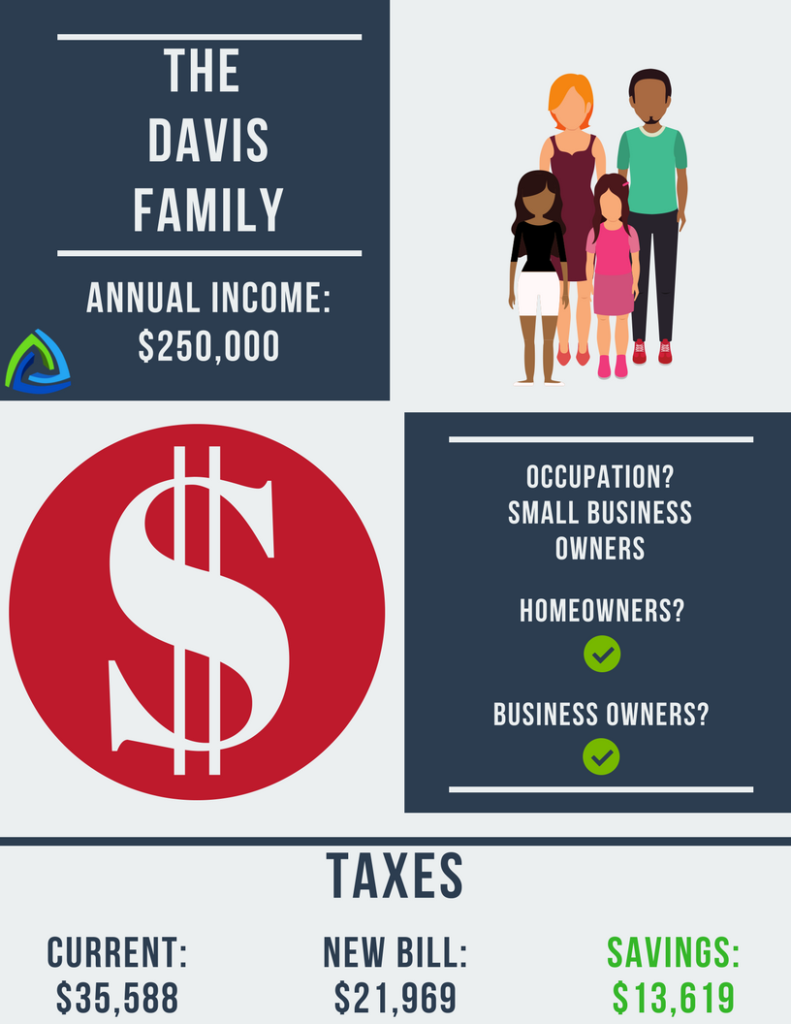 Ralph owns and manages RM Blinds and Shades manufacturing company. Michelle primarily stays home with their young children, but she also helps out significantly with the business when needed. Under the current tax code, Ralph and Michelle pay $35,588, which is their alternative minimum tax (AMT) amount.

The AMT is a separate tax system, created back in 1982 to make sure that millionaires paid their “fair share” in taxes. However, because the AMT was not indexed for inflation until 30 years after it was enacted, it now hits a significant number of middle- to upper-income Americans with a higher tax bill than they would otherwise pay. That’s because under the current tax code, taxpayers pay the larger of what they owe under the regular income tax system and the AMT.

The new tax bill increases the exemption level for the AMT, and significantly raises the income level at which the phase-out of that exemption begins (the phase-out creates a phantom, 35 percent marginal rate in addition to the AMT’s stated 26 and 28 percent rates).

However, the deduction for their small business income lowers their regular income tax bill under the new bill to a level ($20,384) that is below their new AMT tax bill ($21,969). Thus, while they still pay the AMT (which does not provide the small business deduction), Ralph and Michelle would pay much more in federal income taxes without the deduction.

The above examples seek to show how some common taxpayers—including some wealthy individuals who are less common—would fare under the proposed tax reforms.

On net, however, most taxpayers—particularly lower- and middle-income taxpayers and businesses—will pay less in total taxes. Even more important than total taxes paid, however, is marginal tax rates. That’s because a lot of decisions are made at the margin.

For example, a worker is far more likely to work an additional hour if it counts as overtime and provides the equivalent of 1.5 hours’ worth of pay. And an individual is more likely to make a $1,000 contribution to his retirement savings account if that savings goes tax-free and means he can put all $1,000 away, instead of first having to pay between $100 and $400 in taxes on the savings.

While the proposed tax reforms do not achieve 100 percent of the potential pro-growth impacts that they could, they go a long way in helping to jump-start America’s struggling economy and put it on a pathway toward higher long-term growth. This leaves tax reform an unfinished business.

The expiration and phase-out of some of the tax cuts in this plan will provide the opportunity for Congress to enact more of the pro-growth components lawmakers left out of this tax package.