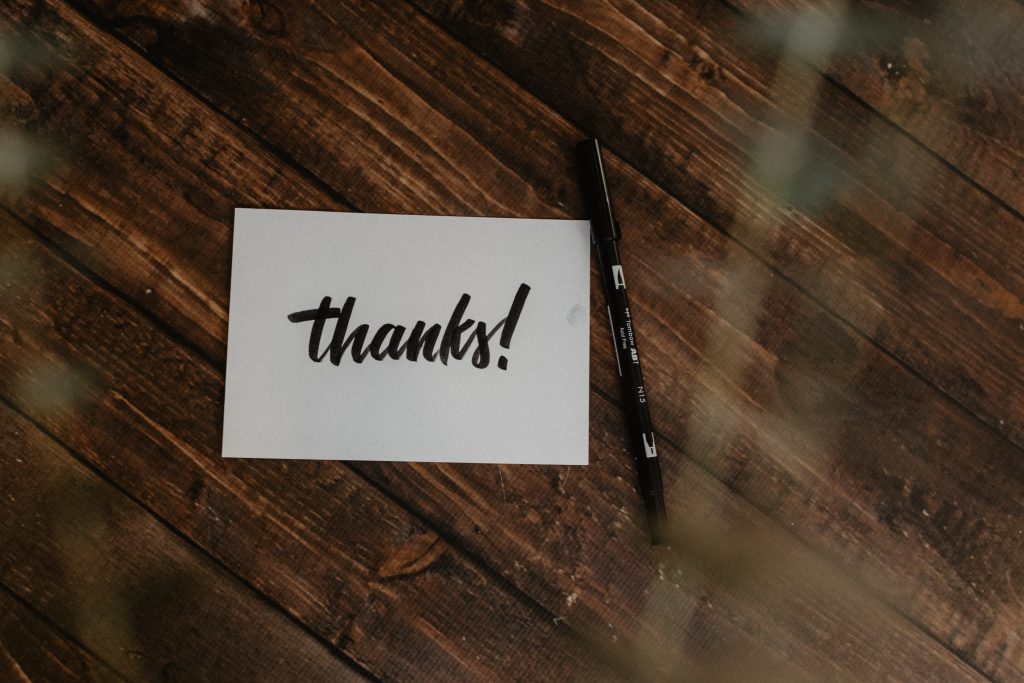 By: Emily Monaco for The Muse, Photo by Kelly Sikkema on Unsplash

I’m a huge fan of New Year’s resolutions, especially actionable ones. Instead of “lose 10 pounds,” I once resolved to eat five servings of veggies a day. Instead of “spend less time on my phone,” I resolved to sleep with my phone in a different room. And after a particularly tough end to 2018, instead of “count my blessings,” I resolved to write a thank you note every week for a year. (I’m not alone in committing to thank yous—in fact, you may have heard of others doing similar experiments.)

The year started off fairly easy: Each week in January and February, I picked a close friend or family member and described in a handwritten note why I was grateful to have them in my life. I purposefully didn’t put return addresses on them; I didn’t want anyone to think I was expecting a response. Sometimes I heard back anyway: a phone call, a message on Facebook. Most of the time I didn’t, but I didn’t mind. I was happy just to be putting those feelings out into the world.

But by March, I struggled to think of people I hadn’t written to yet. I started resenting the task, and I put it off, my weekly note rolling over into the next week and the one after that until I was facing a stack of four blank cards to fill.

Then it dawned on me that, without really meaning to, I’d restricted my thank yous to the personal sphere. When I decided to extend my resolution into my professional network, I found a wealth of people there to thank.

I’ve been a freelance writer for about ten years. In that time, I’ve written countless emails: pitching stories, seeking sources, following up with folks who’ve ghosted me, tracking down late payments weeks, months, or years after the fact (I’m still waiting for one payment from 2012!). While I love the flurry of activity, one drawback is that the squeaky wheel usually gets the grease. I’m not proud of it, but I’ll admit that I don’t usually take the time to follow up with the people I’ve worked with—even the ones I really should thank.

For example, I often find myself needing a clear, concise quote from a source with highly specific knowledge in a matter of hours. While of course I say “thank you” when we speak, I’ve always intended to reach out to these experts and the publicists who represent them when a story finally runs, thanking them again for their help and sharing the final product. Too often, however, by the time this happens, I’ve moved on to my next assignment, my attention consumed by another rapidly approaching deadline.

So I decided to be proactive. Each time I filed a story, I took a moment to make a list of the people instrumental to it and drafted the emails I planned to send once the article was published. It was easy enough to remember to add a link when it went live and hit send.

Sometimes, I got no response at all or a simple “thanks!” back. But one PR rep I wrote to thank for help locating a source followed up with a list of other clients she was working with, which ultimately led me to find the perfect source for an upcoming story. Regardless of the responses, I kept it up, and soon, sending thank yous became so routine that instead of one a week, I was often sending four or five a day. My new system had made it so easy that I stopped counting these as part of my resolution.

Building Relationships With Clients and Colleagues

Back in the market for recipients to count toward my weekly note, I thought about how I work with dozens of talented, helpful, insightful editors. They’re my “clients,” so to speak, and there’s lots of back and forth and lots of “thanks!” in passing.

But when one project with an editor I’d quite enjoyed working with came to an end, I sent her a proper “thank you” email saying as much. She wrote back, encouraging me to pitch again to fill an unexpected hole in her editorial calendar. My note had reminded her who I was long after invoices had been filed, and it felt like our relationship had evolved from a transactional one to something more like true colleagues.

As time went on, I reached out to more and more people. I thanked a fellow journalist who had given my name to an editor she works with, a gesture on her part that landed me a sought-after byline at a top-tier publication. Her note was instrumental in my forging a relationship with a new editor, and her willingness to put her own reputation on the line by recommending me felt well worth the minutes it took to compose and send a simple, genuine “thank you.”

It’s not always about my own work, either. After reading what I found to be a thoughtful, important article, I reached out to the journalist behind it, thanking her for her work. She shot back a quick “thanks,” but I found out later through her Instagram story that she’d been feeling silenced and overlooked, and that appreciative notes from colleagues had been just what she needed. While she didn’t cite me by name, it warmed my heart to see my notes were making a difference in other people’s lives.

It has started to become automatic: Now, when I read a piece written by a colleague that I find particularly resonant, I let them know—whether or not it’s time to write my weekly note.

Reflecting on My Career Progress

This experiment also spurred me to look back to the early days of my career. When I was first starting out as a journalist, I worked in-house for a French media company, where my direct superior was an experienced journalist who’d worked for some of the top French news outlets. My boss was hard on me, constantly demanding I do better—and sometimes even telling me to overhaul an entire project and start from scratch. It was one of the toughest professional environments I’ve ever worked in, but I like to think I rose to the occasion.

Since leaving that job, I’ve often thought of his advice—especially when I realize, halfway through a project, that the best thing may be to scrap it and start from scratch. One day in May, after filing a particularly tough piece, I decided he would be the recipient of my next thank you note.

I spent a week laboring over it, editing it, and asking friends and colleagues for advice. Finally, I sent it into the ether. It’s been about three months, and I’ve yet to receive a response.

It smarted, at first. I’d hoped that my gratitude would be echoed in his response as recognition, perhaps, that he, too, had thought of himself as my mentor. Maybe he’d even give some sign that he’d been following my career since we parted ways, that he was proud of me and my work.

But as time went on, I realized it didn’t really matter if he wrote back. Composing the note forced me to focus on just how far I’d come since my first forays into journalism nearly a decade ago. I reflected not only on his mentorship, but also on how often I’ve tapped into that knowledge and how much of a positive impact it’s had on my work. He taught me to be rigorous. He taught me to ask tough questions. He taught me where to look to find the thread of a story. He showed me what I’m capable of as a journalist—and whether he responds someday or not, I remain grateful.

I’m more than halfway through my year of writing a thank you note a week, and if I’m being honest, I’m not sure I’ll maintain this rhythm into next year. But I will keep a few good habits.

I’ll always thank people for their contributions—however small—to my ability to do my job. I’ll try to reach out to people whose work has touched or influenced me. And I’ll endeavor to remember that human contact and gratitude is an essential part of building the kind of career I can be proud of.