Dems’ Medicare for All Bill Would Neuter Private Insurance 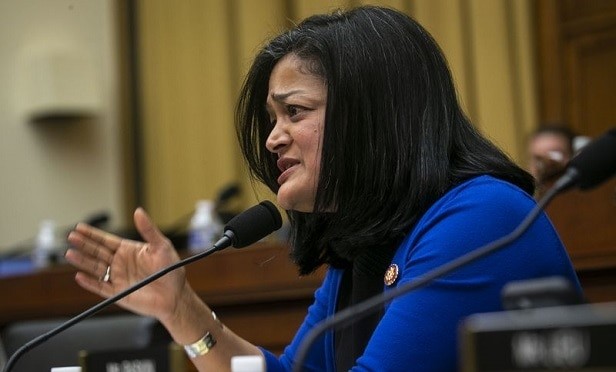 By: Sahil Kapur and John Tozzi for Benefits Pro, Photo by Al Drago/Bloomberg

A leader of House Democrats’ progressive wing is proposing “Medicare for all” legislation that would replace almost all private health insurance, an idea that’s galvanizing the party’s liberal base and winning endorsements from many of its top presidential contenders.

The legislation by Congressional Progressive Caucus co-chair Pramila Jayapal would steer all Americans — not just those 65 and older — into the Medicare program in two years. It would cover comprehensive health care services and, in a radical departure from the existing system, limit private insurance to supplemental benefits not provided by the government-run program.

“The state of our health care system is absolutely atrocious,” Jayapal of Washington told reporters on a conference call Tuesday. “Americans are literally dying because they can’t afford insulin or they can’t get the cancer treatment they need. Americans are going bankrupt.”

She said the measure will be introduced Wednesday with more than 100 co-sponsors.

Jayapal didn’t say how much it would cost or how it would be funded. The measure would eliminate all premiums, deductibles and co-pays while guaranteeing universal health care access to “every person living in the United States,” according to a summary provided by Jayapal’s office. The summary said combining all coverage into one program would reduce administrative costs and let Medicare set doctors’ fees, hospital budgets, and negotiate drug prices.

A member of Jayapal’s staff said options for financing the plan include a wealth tax, higher marginal tax rates and repealing portions of the 2017 Republican tax cuts. While the proposal would dramatically raise the government’s tab on health care, the staff member, who spoke on condition of anonymity, suggested that overall U.S. spending on health services would fall.

A small private insurance market for services not covered by Medicare wouldn’t receive any federal funding under Jayapal’s plan.

Democratic presidential contenders who support the idea of Medicare for all include five senators — Vermont’s Bernie Sanders, Massachusetts’s Elizabeth Warren, New York’s Kirsten Gillibrand, New Jersey’s Cory Booker and California’s Kamala Harris — as well as Julián Castro, a former cabinet secretary in the Obama administration. Candidates are being quizzed about the issue on the campaign trail.

Harris drew applause Saturday at a town hall in Ankeny, Iowa, when she touted Medicare for all as a mechanism to cut costs on emergency room visits by people who currently lack coverage. She said it would also let the government take on drug companies that “dictate prices” to make money.

Not all Democratic presidential contenders endorse the idea. Minnesota Senator Amy Klobuchar, who portrays herself as a pragmatist, said at a recent CNN town hall that Medicare for all “could be a possibility in the future” but she doesn’t view it as realistic now.

For now, Medicare for all has no chance of becoming law in a divided Congress. Democrats control the House but Speaker Nancy Pelosi and a number of party moderates are resisting the idea. On Tuesday, a member of the House Democratic leadership, Hakeem Jeffries of New York, kept his distance from the proposal, saying the Democratic caucus supports universal coverage but wants to focus on strengthening the 2010 Affordable Care Act and lowering drug costs.

Even if it passed the House, the proposal would be doomed in the Republican-controlled Senate. President Donald Trump has argued Medicare for all would have a disastrous impact.

He said in an October USA Today op-ed that the Democrats would “gut Medicare with their planned government takeover of American health care.” He said the proposal would put doctors and hospitals out of business and create “long wait lines for appointments and procedures.”

It’s a high-risk idea. A January 2019 poll by the nonpartisan Kaiser Family Foundation found that Americans favor the idea of “national health care, sometimes called Medicare-for-all” by a margin of 56 percent to 42 percent. But public opinion fluctuates dramatically depending on what respondents hear about it. When told it would guarantee health insurance as a right, 71 percent support the idea; but when told it would eliminate private insurers and require most Americans to pay more taxes, just 37 percent support it.

Perhaps the greatest political danger for Democrats is that Medicare for all would disrupt coverage for about 156 million Americans who get their insurance from an employer. The proposal would face fierce objections from the health-care industry, including doctors, insurers and pharmaceutical companies.

Brian Marcotte, president of the National Business Group on Health, which represents large employers, said, “There are so many questions about this, so it’s really hard to take Medicare for all seriously when there’s so much unknown about how you would make this transformation and actually make it work.”

The American Medical Association, the doctors’ organization that supported the Affordable Care Act, said in a statement that it is “opposed to Medicare for all based on a mountain of evidence about the cost, counterproductive disruption, and degradation of choice, quality and innovation that Americans deserve and want.”

For-profit, publicly traded health insurers employ more than a half million people in the U.S. The companies’ combined stock market value is worth more than one-half trillion dollars, according to data compiled by Bloomberg.

Private companies and nonprofits also manage health plans for more than two-thirds of the 75 million people enrolled in Medicaid. Much of their business would be replaced by a government program that would bar private companies from selling coverage that duplicates government benefits, and prohibit employers from offering such plans.

Advocates of single-payer health coverage count on savings from eliminating insurance companies as intermediaries between patients and doctors. Government estimates put the administrative cost of private health insurance at $229 billion, less than 7 percent of the $3.5 trillion the spent on U.S. health care in 2017.

Jayapal said Americans who worry about losing private insurance will come around to Medicare for all once they’re told they’ll still have access to their preferred doctors and hospitals under the government-run plan.

“People are not saying they’re dying to have health insurance companies in their lives,” she said.